You are here: Home1 / News2 / Choosing the Right Robot 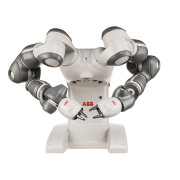 Robotics has been advancing at a rate of knots over the past 10 years and although the time of replacing the majority of manual labour with robot operations is still a long way off, there are some interesting new industrial robots appearing which come much closer to undertaking human tasks.  As an experienced robot integrator with years of experience and hundreds of installations, Cyan Tec Systems is well-placed to offer advice on the best and latest robot automation solutions.

Many suppliers are offering the new style of “collaborative robots”, one example of which is the YuMi robot from ABB, which has been launched recently.  This is perhaps the most mainstream of this genre, coming from one of the “big four” global robot suppliers which are expected to grow rapidly to take the place of more expensive robots or human operators.

What does the YuMi do?

The YuMi robot looks a lot more like, and shares many characteristics with, the human body.  Designed to work alongside humans, the most notable change from the typical industrial 6-axis robot is the fact that YuMi is designed to work in the open and not behind guarding and safety interlocks. 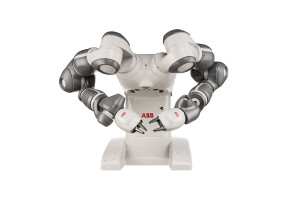 YuMi is equipped with twin articulated arms which terminate in gripper hands.  The concept of collaborative robots is that a shop floor may consist of a mixture of humans and robots, the robots being able to feed or be fed by human operators who might be given the more complicated tasks (or tasks requiring human intelligence).  Movement speed is restricted and the arms are equipped with crash sensors to stop safely if they should come into contact with a human operator, avoiding the risk of pinch, crush or impact injuries.

Ideal for small electronic component assembly, the robot will not replace the traditional 6-axis industrial robot, rather it complements the range and expands the capabilities of robot-based automation.  The YuMi robot can use vision to correctly pick and place components regardless of orientation and with the ability to compensate for inaccuracy of position, in the same way a human would.  As well as having the dexterity of a human operator, the collaborative robot can be easily trained and re-trained, coping well with boring, repetitive or ergonomically challenging tasks.

For some applications, where long reach or interpolated path following is required, there is no substitute for the speed and accuracy of the traditional 6-axis robot.  These robots are still the obvious choice where the robot is using a tool which necessitates full safety guarding (for example laser welding or cutting).  In these applications, the capability of the 6-axis robot makes it the most appropriate choice.

In other applications involving simpler action, it might be that a Scara robot with 4-axes is more suitable.  These robots have fewer movements than the full 6-axis robot and are often used for pick-and-place in assembly or in loading and unloading machines.

With robots, as with other elements in automation, there is no single solution which suits every situation.  Flexibility and open-mindedness will allow the optimum configuration to be found, taking into account all the criteria required by the application.  In the next decade it is likely that many more collaborative robots will be installed and new technology is enhancing the vision, motion accuracy and intelligence of robots.

When to use a SCARA Robot

The Uses of Composites in Manufacturing

This site uses cookies. By continuing to browse the site, you are agreeing to our use of cookies.

We may request cookies to be set on your device. We use cookies to let us know when you visit our websites, how you interact with us, to enrich your user experience, and to customize your relationship with our website.

Click on the different category headings to find out more. You can also change some of your preferences. Note that blocking some types of cookies may impact your experience on our websites and the services we are able to offer.

These cookies are strictly necessary to provide you with services available through our website and to use some of its features.

Because these cookies are strictly necessary to deliver the website, refuseing them will have impact how our site functions. You always can block or delete cookies by changing your browser settings and force blocking all cookies on this website. But this will always prompt you to accept/refuse cookies when revisiting our site.

We fully respect if you want to refuse cookies but to avoid asking you again and again kindly allow us to store a cookie for that. You are free to opt out any time or opt in for other cookies to get a better experience. If you refuse cookies we will remove all set cookies in our domain.

We provide you with a list of stored cookies on your computer in our domain so you can check what we stored. Due to security reasons we are not able to show or modify cookies from other domains. You can check these in your browser security settings.

These cookies collect information that is used either in aggregate form to help us understand how our website is being used or how effective our marketing campaigns are, or to help us customize our website and application for you in order to enhance your experience.

If you do not want that we track your visit to our site you can disable tracking in your browser here:

We also use different external services like Google Webfonts, Google Maps, and external Video providers. Since these providers may collect personal data like your IP address we allow you to block them here. Please be aware that this might heavily reduce the functionality and appearance of our site. Changes will take effect once you reload the page.

The following cookies are also needed - You can choose if you want to allow them: